Our second day that we went to the space center, we had a guided bus tour set up for 11:00 am, so when we got there we went right to the Atlantis building again. We wanted to experience again going in the theatre rooms and seeing the Atlantis through the screen .It was awesome again as people were clapping and hooping it up. After that we walked around a little till our bus tour. Your daily ticket includes a 40 minute bus tour out to some of the launch sites and a drive by of the Vehicle Assembly Building, VAB for short. But we decided to take the guided two-hour tour. The bus tour took us out over the water causeways to some of the launch pads, and then to the some of the headquarters buildings and final assembly buildings of some of the capsules and main pieces of spacecraft. We then had a visit to the historic launch pad 39A, and 39B ,where most of the Apollo flights and a lot of the Shuttle missions took off from. Then we had an outside tour of the Vehicle Assembly Building, WOW. This one story building is over 525 feet tall and is the largest single floor building in the world. This thing you cannot even grasp how tall and big it is. The VAB is where the Apollo and shuttles would be mounted upright and attached to the main service structure. After that a huge crawler would go under it and affix itself to the bottom. The whole assembly then transports itself to the launch pads. We were lucky enough to see one of the main doors open and inside is the new space launch system superstructure. Again its hard to fathom how huge all this is. After that we ended up at the Apollo/Saturn V Center, where there is an actual Saturn V rocket inside. The building is over 400 feet long, houses the complete rocket along with the lunar lander, and the Apollo 14 command module. I was in heaven as this is what I wanted to see most.  We spent about 4 hours in the center ,more than Melissa wanted but oh well. It was a great experience and the power and technology it took to get man to the moon. 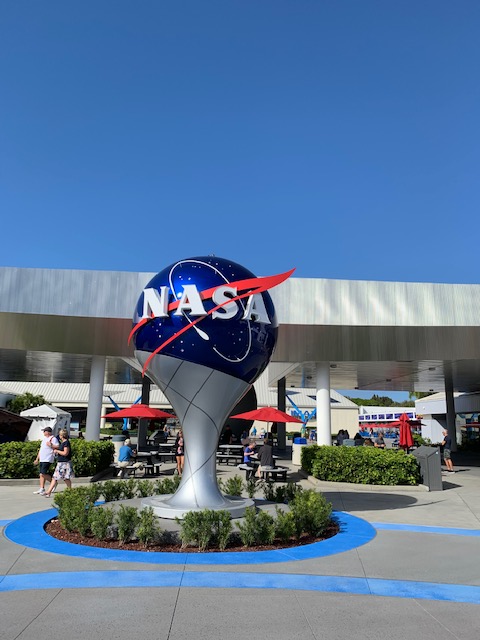 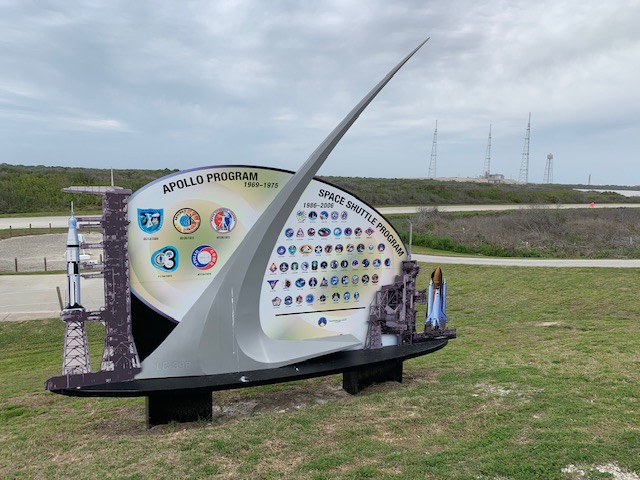 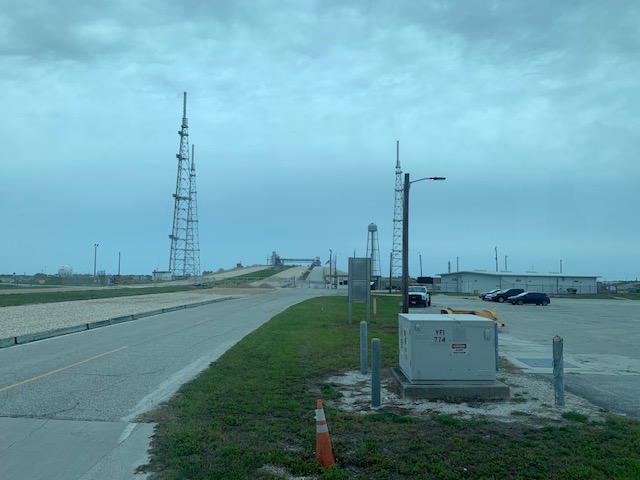 Closer pad 39a. The towers are not only for communications, but serve as lightning rods. 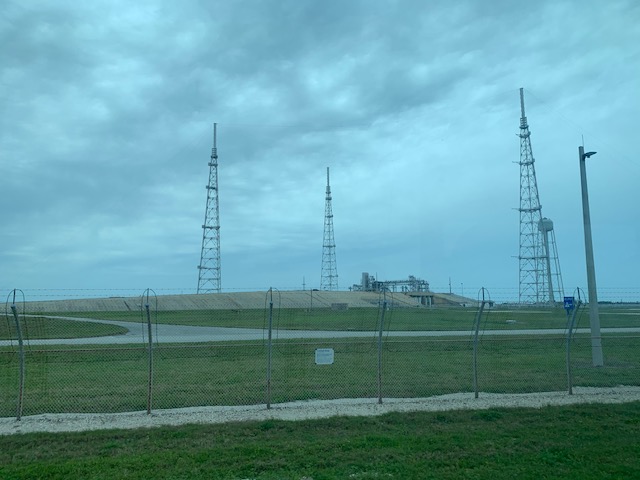 Notice the elevation of the concrete launch pad, under which in the center it is hollow and allows the exhaust of the rockets to escape. The water tower, on launch releases @ 400,000 thousand gallons of water into the channels and instantly vaporizes the flames. I always thought it was to suppress the smoke, but the water deadens the sound of the rocket by over 30 percent. Also if you are within 100 yards at launch you are instantly vaporized, if you are 800 yards away the vibration of the sound kills you. The safest distance is 3 miles away.

The VAB building, read below to get a feel of how big it is. 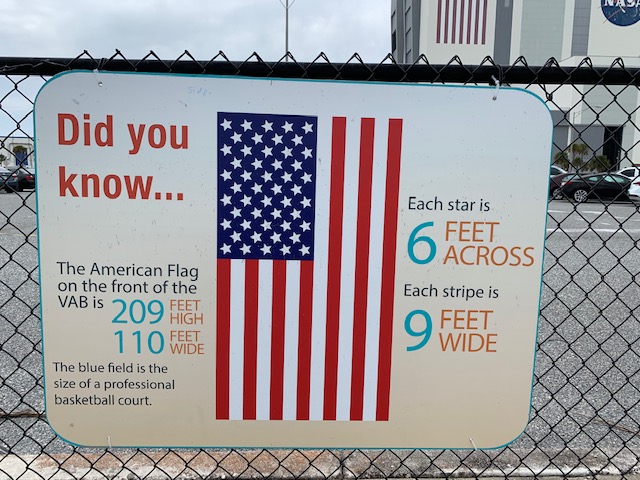 A bus can drive on the stripes. 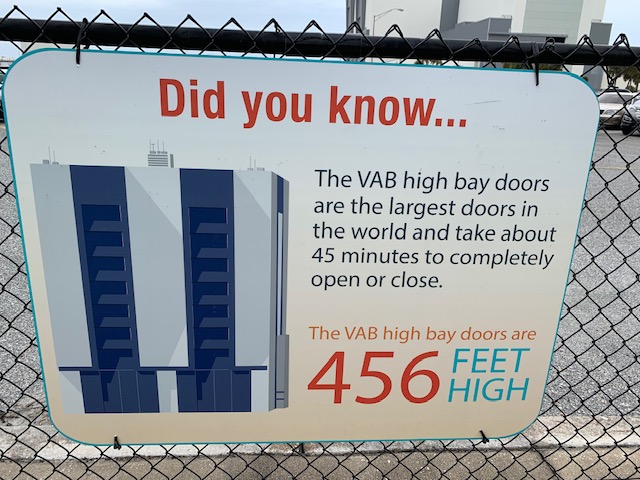 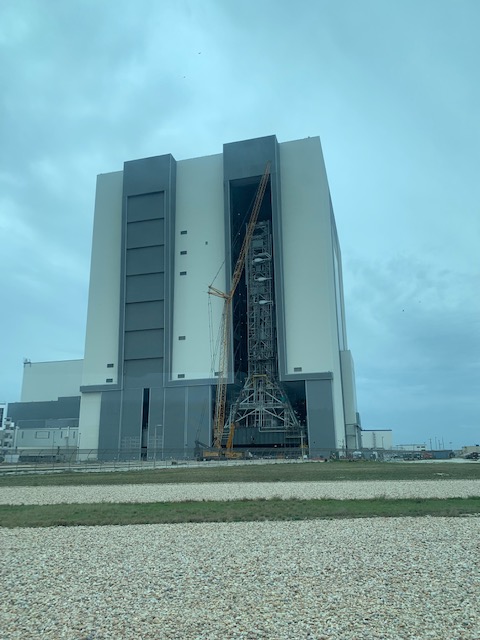 The VAB with the new space launch system. 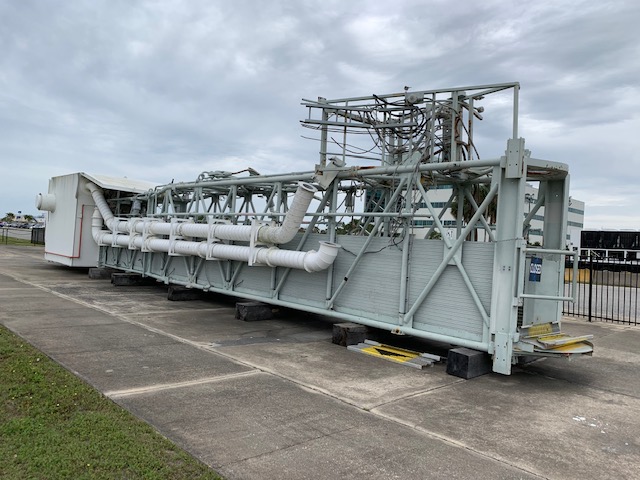 The swivel control arm that let the crew into the ship. Huge

Launch control building attached to the VAB. Notice the road, this is what the massive crawler drives on. Each lane is 30 feet wide. The top layer is of Alabama river rock, which does not contain anything to cause a spark, it is 2 feet thick, under that is four feet of granite rock ,and then four to six feet of compacted clay . Over ten feet deep of road ,and over three and a half miles of it. 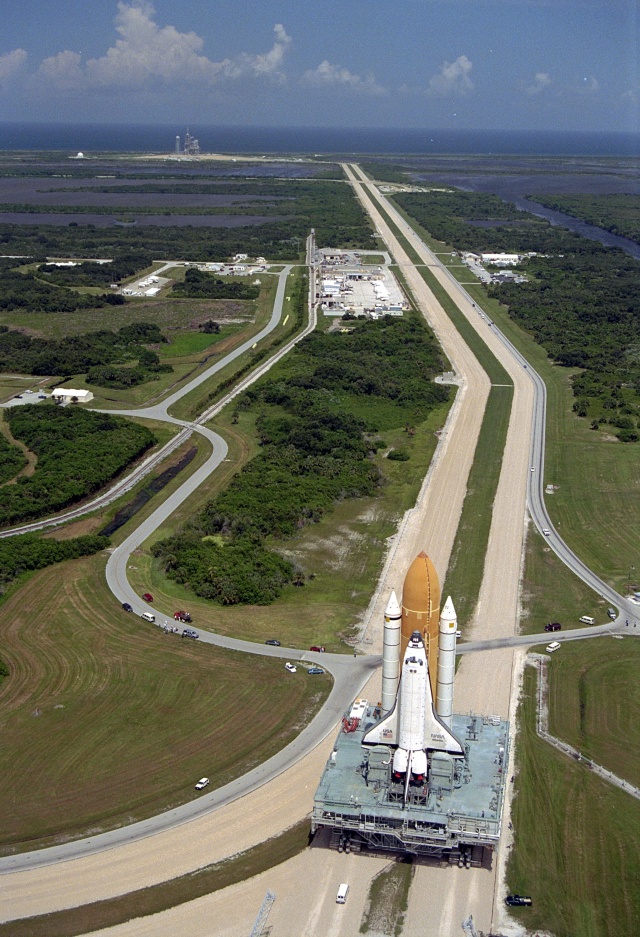 The shuttle being taken to the launch pad on the giant crawler.. Amazing 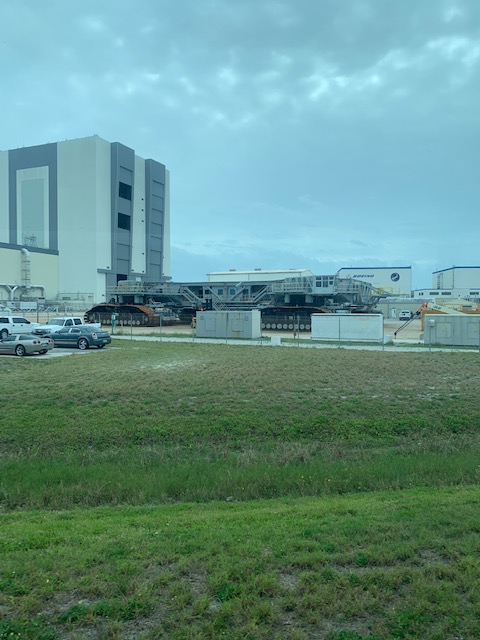 Notice the tracks each one is the size of a greyhound bus, a total of eight.

This crawler is on its mounting, but you can get a size of it by the huge crane underneath. A monster.

Close up, the crawler id driven by one guy, it has a top speed of two miles and hour. When a spacecraft is on it, it goes a whopping 1/2 mile an hour. There are eight men total that drive the crawler to the pad, each one drives for twenty minutes then another takes over, all they can take with the stress involved. Not for me, and remember these were built in the late 1960’s 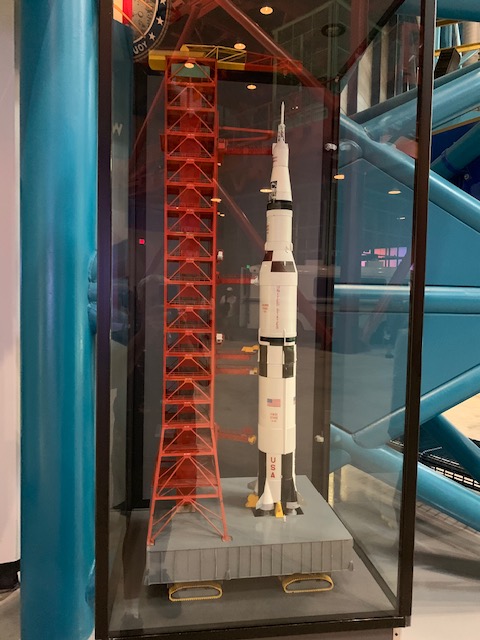 The five main F-1 engines for the Saturn V rocket. The rocket was over ninety percent fuel so it took engines like this to get it into space.

This is the main engine, over twelve feet wide and sixteen feet high. And five of them on the Saturn V.

The bottom line tells it all, the power is unreal.

Once the first stage was spent it was let loose and the second stage rockets took over smaller than the main engine it got the ship into orbit. 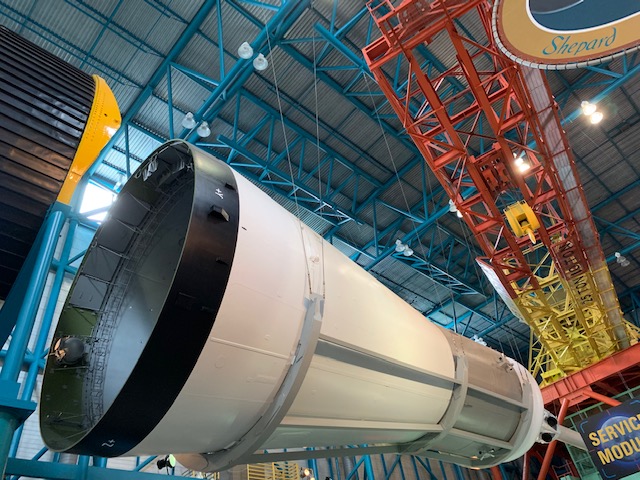 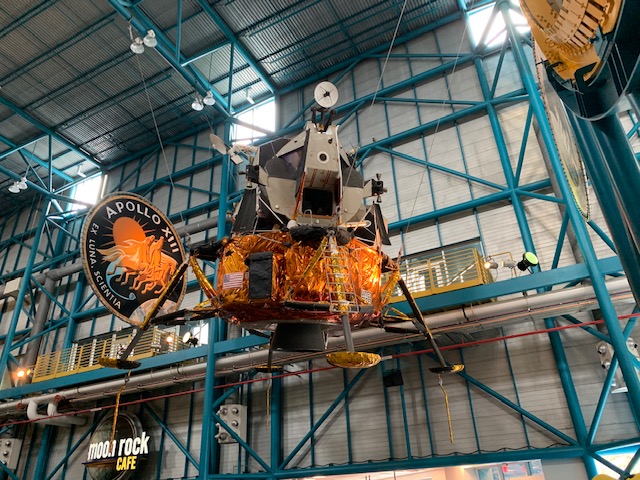 The lunar lander, which went to the moon and landed. The upper part above the silver would be what the astronauts were in and what they lifted off the moon in. The lower part stayed on the moon.

Command module and service module all that’s left of the massive Saturn V rocket. The front clear part is where the lunar lander would be connected to and let go of to go to the moon and back. 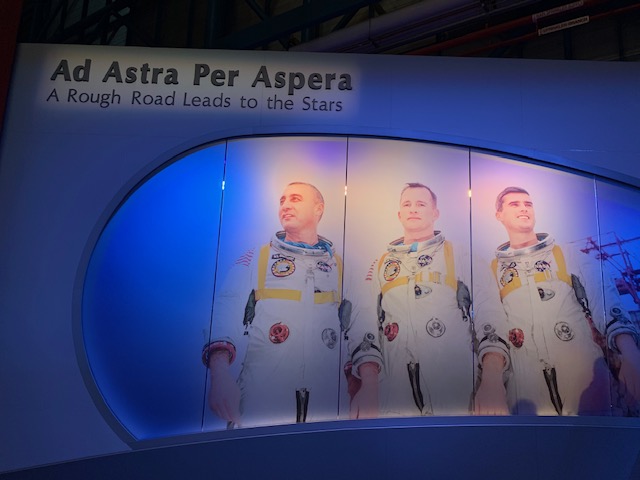 They also had a tribute area for the three astronauts killed in the Apollo I ship while doing launch training. The ship at that time had pure oxygen in it and a spark caused a fire. Because of this the program was delayed getting to the moon for a year and a half, but over 1100 issues were found and fixed.