Went back into Florida on Tuesday to go to Fort Clinch State park. This is the park we wanted to stay at but could not get in, it is very hard to make reservations, as it is very popular. So that is why we are at crooked river in Georgia.

Fort clinch park is huge, has very old live oak trees with the Spanish moss covering it ,kind of eerie. But the draw is the fort, which is very big. The fort is at the mouth of the St. Mary’s river, and the Atlantic ocean. It has a deep water way so good for a port. The fort was started in 1842, right on the beach, made of brick and mortar,with 25 foot high earthen mounds around it, then a depression or moat with a draw bridge. The walls are about 20 feet high and three or four feet thick. Each corner has a bastion or 4 sided defensive position with rifle ports at certain levels and a cannon on top. There are tunnels and covered ways every where to get to places. Inside it has buildings for the men , and everything you would need to keep it operating. It was the most impressive thing I have seen on our trip. The fort was never really finished ,during the civil war it was modified and built a little more. The fort was to protect the harbor, so it had an array of large cannon, siege guns and even a few mortars.  The fort in its long history never fired a shot nor was it ever attached.We spent over two hours exploring the fort and the buildings inside. 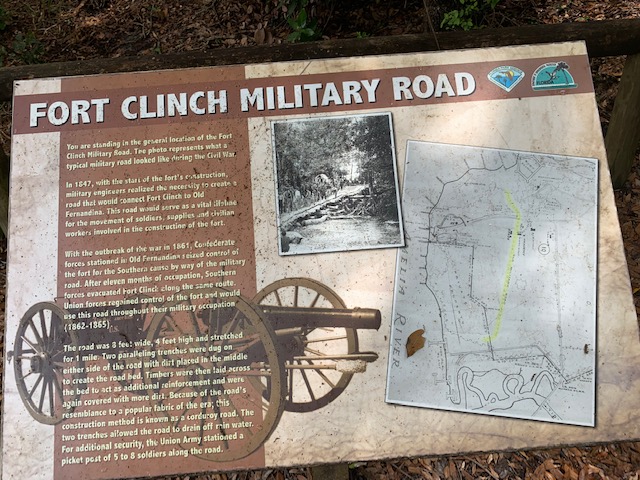 Map of the old road getting to the fort, parts of it are still here.

Part of the old road, now a path. 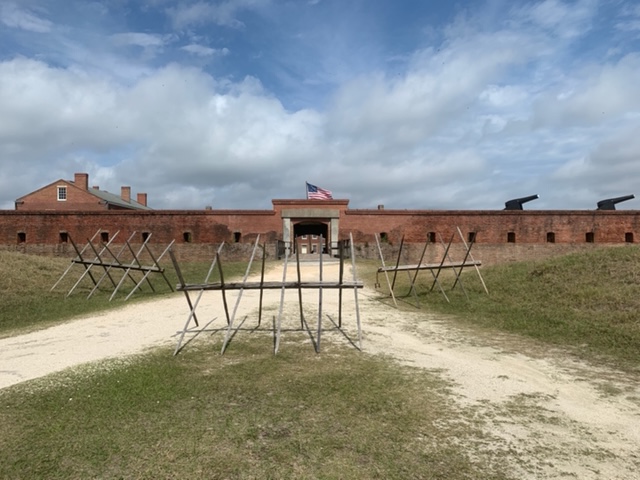 The fort entrance after you exit the visitors center. The spiked rails, are for keeping horses from charging in, they will not jump over these most of the time they would stop dead in their tracks and the rider would tumble forward off. Infantry also had a hard time getting by these. There would have been hundreds of these.

After entering the gates to the fort. 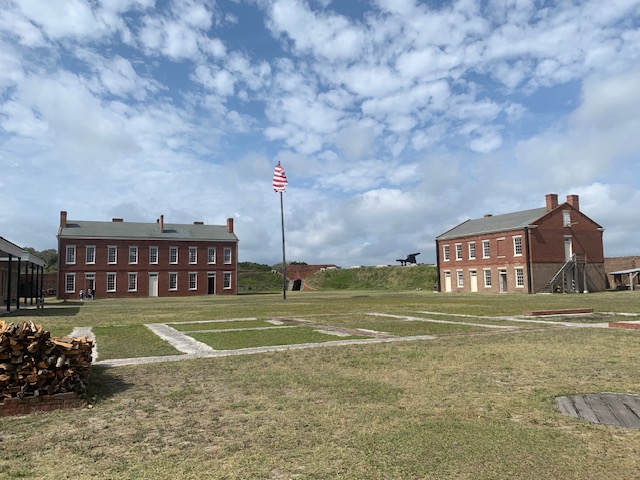 Inside one of the mens barraks 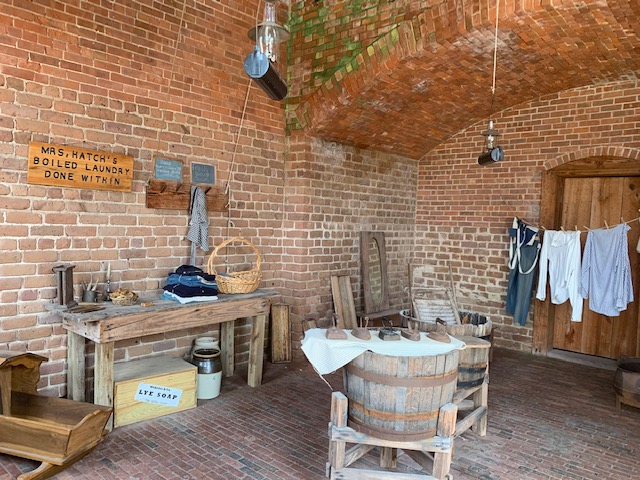 My favorite room, the toilet.

One of the many tunnel rooms to get to the outer part of the fort.

Par of one of the tunnel rooms

Back of one of the main barraks.

The inner part of the fort where one of the main barrak buildings was started but never completed. 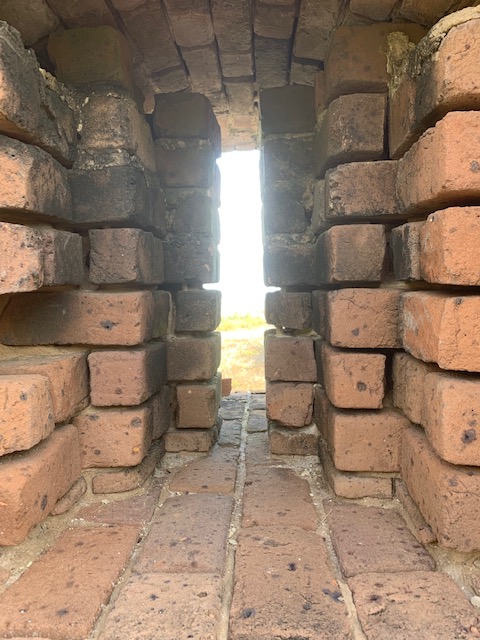 One of the hundreds of rifle ports. Notice how thick the walls are 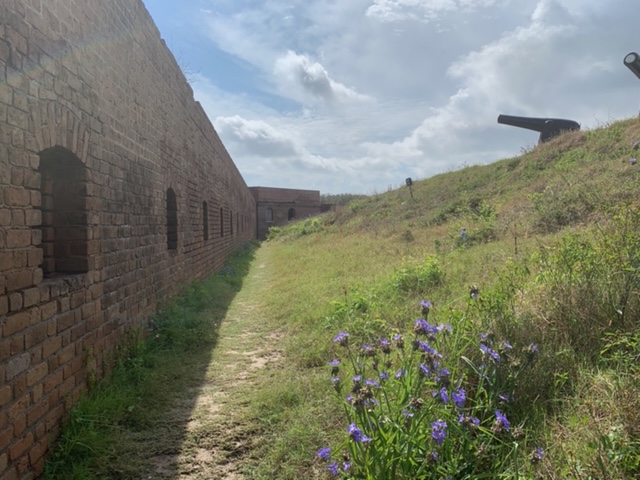 The interior part of the fort.

More inner workings of the fort.

Atop of one of the corner bastions

Another shot of the interior. The cannons are real, they were made in 1862, originally there were only 19 here. 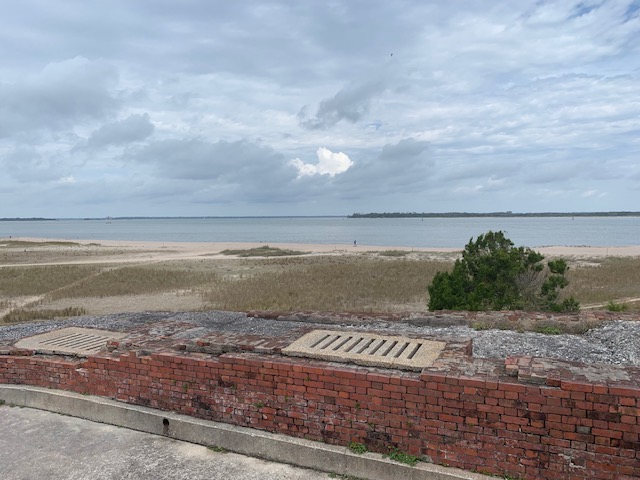 Looking out the river.

Looking out toward the ocean side. 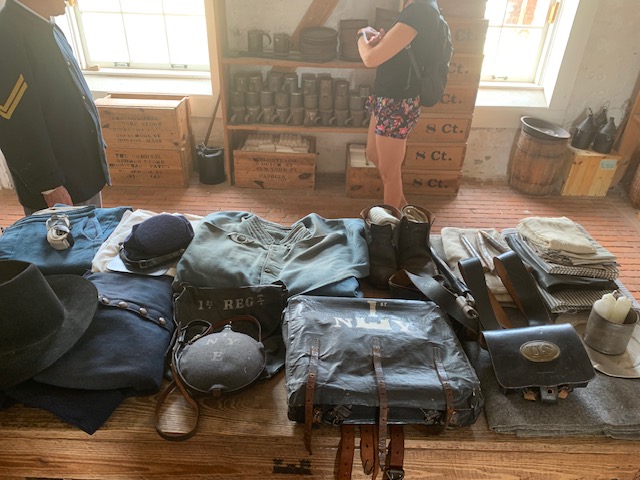 Each man was issued all this equipment

From the outer moat hill.

Fort from the river side. 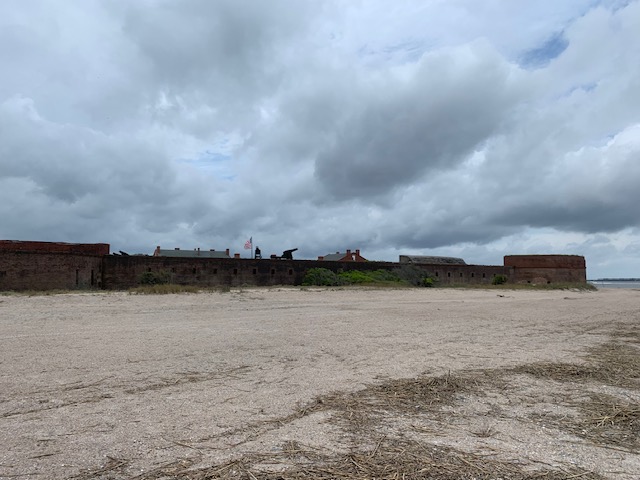 The fort from the ocean side.

The CCC Comes to the fort. 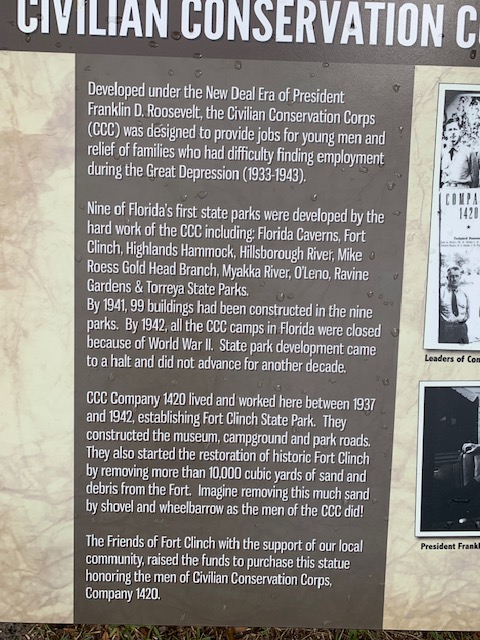 Yep, this place is known for them ,and you can come here and hunt for them all you want. Who knew. It is a very popular thing to do down in Florida. So we did, we spent over two hours looking around the beach. Because it was early afternoon, people had already been over the beachs, but it was low tide. The teeth are here because the river is dredged every 5 years or so. That brings up all the millions of year old fossilized teeth. One guy is saw had about 20 in his bag ,and another guy, who also gave us a lesion in hunting for the teeth, he had about thirty. There are all kinds of teeth from different types of sharks, that lived millions of years ago. We were lucky to find 5, Melissa found the best one. It was a blast and I could go back any time. It was pretty sunny and about 80, some breeze. There is for sure an art to finding them ,so have to practise up for next year. 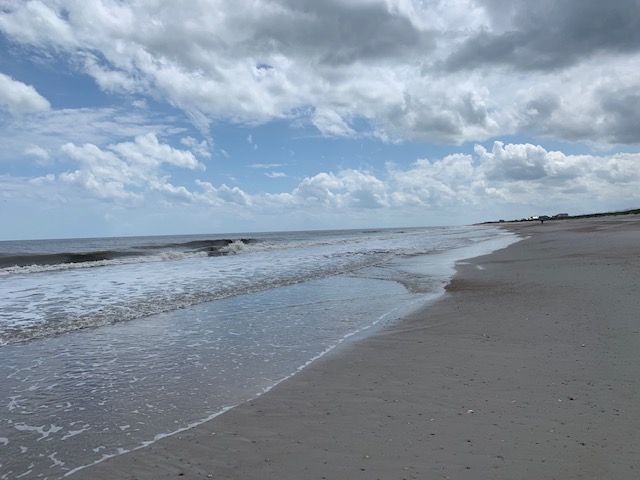 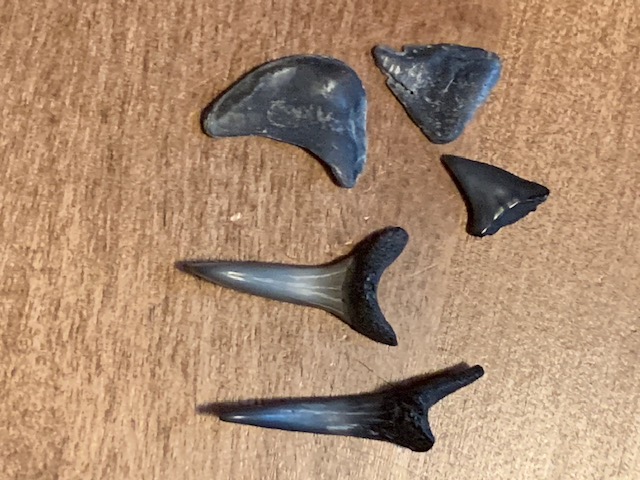