The other day we went to the warbird museum. It was very cool, they have 45 vintage aircraft in their collection and are restoring many others to put on display. The museum itself had a lot of artifacts and stories from different war periods, but the best was the three hangers full of aircraft. Most do not fly any more but a good many of them do fly and a few are on loan that fly all the time. when we got there, there was a tour already in progress, so the lady told us where to find them. When we got there, we could not find any one but heard voices coming from inside this 20 foot long nose section of a B-52 bomber. We waited a few minutes and they came out and the guide wanted to know if we wanted to join the tour and take a look in. so we did, this is an actual 20 foot section of the famous B-52 bomber from the late 1950′ to early 60’s. When you got in the lower part it was crammed with all kinds of electrical gear and two seats. This is where the Engineer and navigator sat. No thanks for me. No bigger than 4 square feet. If they had to bail out the hatch below them would blow out and they would eject seat and all out the bottom of the aircraft. We then went up a ladder about five feet up to the pilot and co- pilot seats, wow tight as all get out. There are eight engines on a B-52, ,so many gauges, throttles and hardly a windshield. If they had to bail out the top hatch over them would blow out and they would be ejected out the top of the plane. Melissa got to sit in the pilot’s seat. After we got out of there the rest of the tour lasted about two hours. We saw aircraft from WWII to Vietnam era and the present. It was really awesome. The photos below are of some of the planes we saw.

A replica of the Red Baron’s plane, it flies. 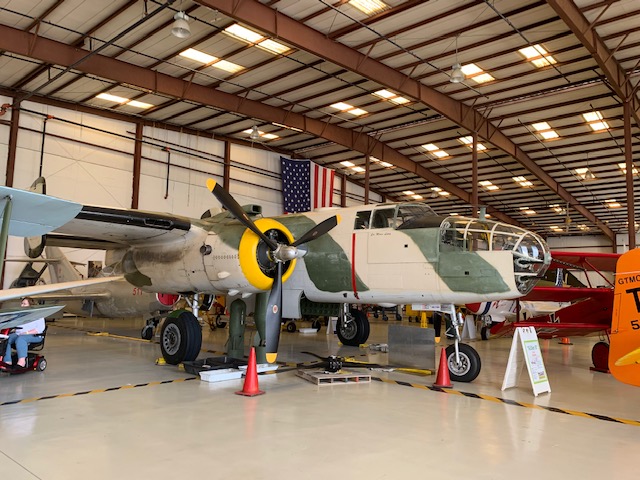 B-25 Mitchell WWII, flies and privately owned. Made famous by the Doolittle Tokyo raid in 1943 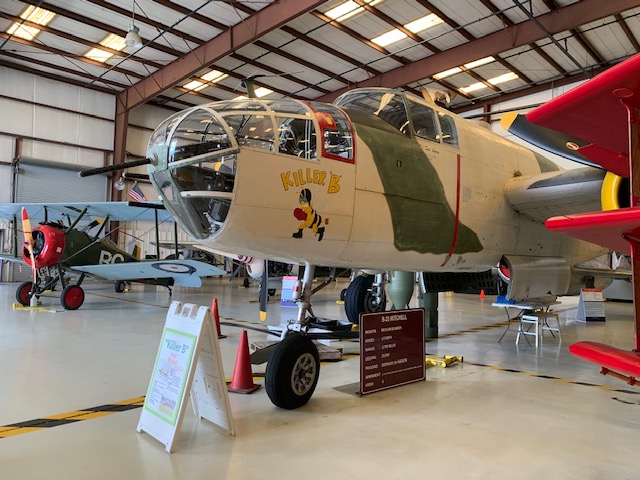 Killer B, actually flew in combat in WWII 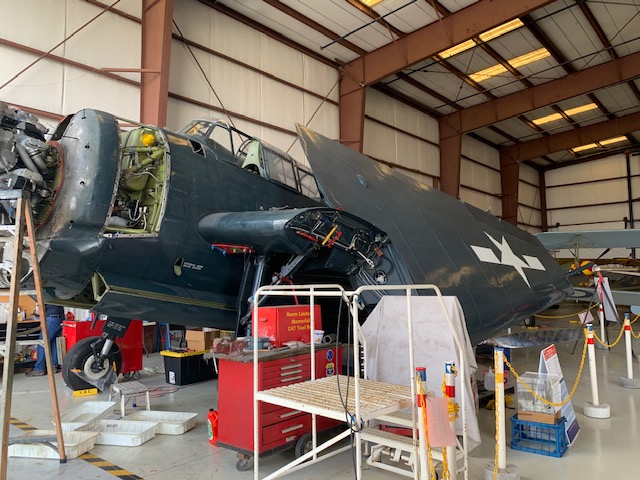 TBF Avenger Dive bomber, early WWII being restored. These flew off of an aircraft carrier, notice the folding wings, so they could get more planes on the ship. Took three men to fold the wing. Had a three-man crew with about a 20′ torpedo underneath. These were decimated early in the war, to slow, but at the battle of Midway they did their job and sank four Japanese aircraft carriers. George W. Bush Sr. Piloted one of these and was shot down but rescues later by an American Submarine.

F4F Hellcat, another carrier aircraft with the folding wings. This was the best fighter the U. S. had at the start of the war in the Pacific. The Japanese Zero was much faster and more maneuverable , but this had more armor in it and could take more damage where the Zero had none and if you could hit it usually burst into flames. I also learned that these planes in the early days were started, with a one foot cylindel, with eight shotgun shells in it. They put it into a compartment in the back of the engine and after the engine was primed with fuel, they did that by turning the propellar by hand. The pilot they flipped a switch and the engine started to turn over, which in turn shot off the shells into each cylinder of the engine and it came to life. No thanks. 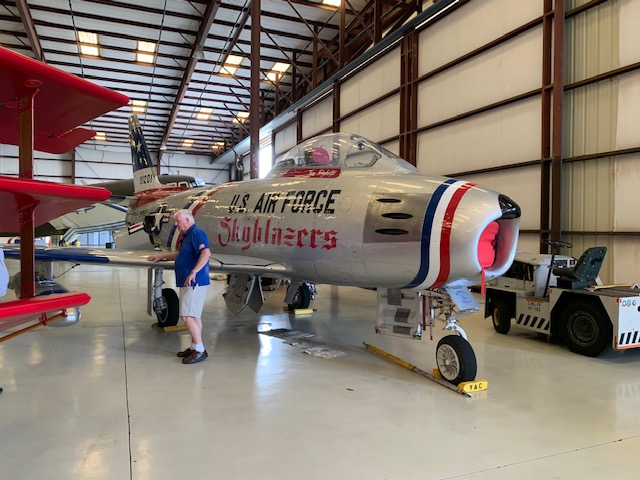 F-86 Sabre, Korean war, and the first jet fighter the U. S. Ever had. This flies and was really neat to see. The black part at the tip of the aircraft is an early type of targetting system. The pilot saw a small circle in his windshield and when it lined up with an enemy aircraft he know he could fire his six cannon up front . 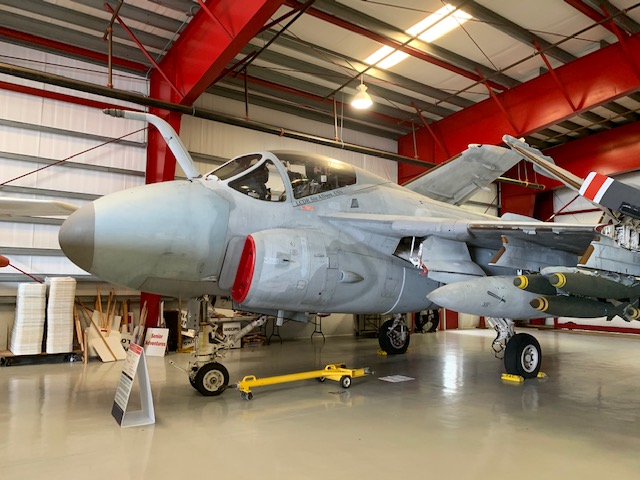 Vietnam era Ugly duck ,big bulkly meduem bomber notice floding wings launched off an aircraft carrier. Also notice the little arm coming off the front wheel. This locked into the catapult system in the deck and the steam catapault would send them at high speed off the deck into the air.

Vietnam era, only prop plane uesed ,but they had three tyes, one had a bubble mounted above and it was ued to jam enemy radar, one hade a round disc above it to be used as a far out reach radar to find enemy planes. And the one here was called the hopper, it was used to bring in extra supplies and men, but especially the mail to the men on the ships. 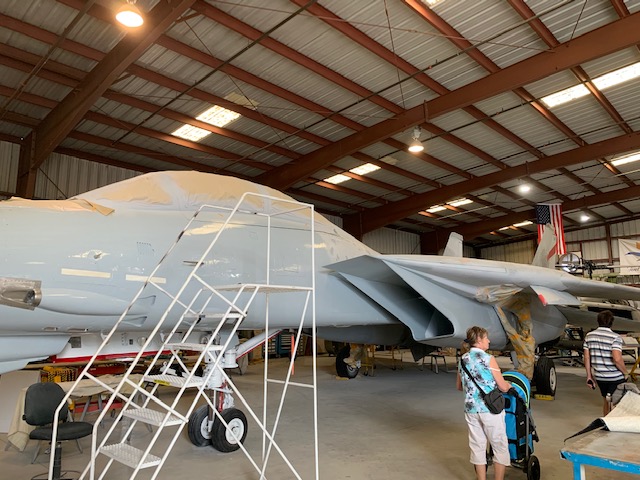 The tomcat . Later 1980’s as seen on the movie top gun, wings were straight for low speed and swept back to go to high speed . 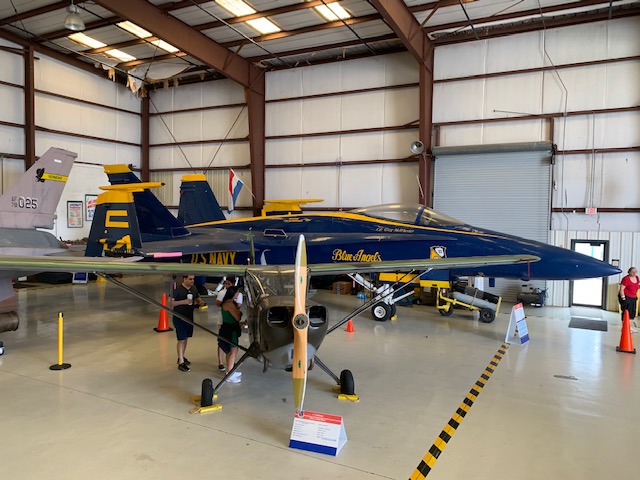 The best for last, this is a WWII  C-47 transport. It flies and is privetly owned. This particular aircraft is famous, it flew three missions on D-Day. It’s first mission was late at night on June 5th 1944, when it carried 32 paratroopers, over the English Channel to Normandy. It came back and flew 32 more paratroopers over, came back and towed 2 gliders with 24 men each over to there landing zone in Normandy. It is shown here painted in it’s invasion colors, with the three stripes, representing Victory. It is mostly original ,but has new engines and a few other improvements. It also took part in the Belin Airlift of late 1945. 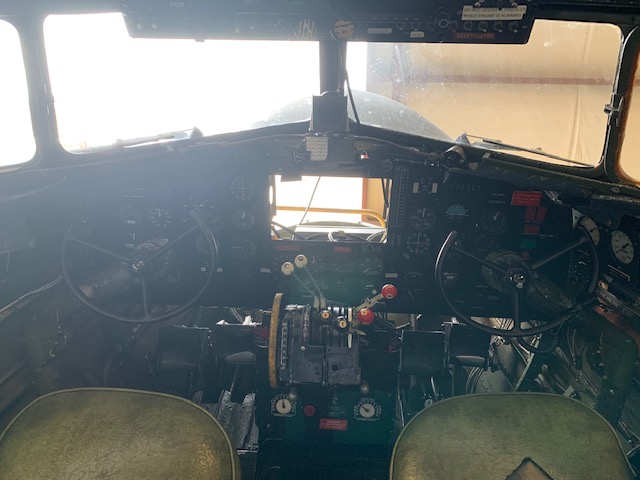