Today is Tuesday the 16th of April already. We have been in the Savannah area for six days already. Today and yesterday we went in to Savannah itself. Both days have been sunny and in the 70’s. We have barely seen anything. We plan on going into the historic city three more days yet. I will have a series of posts on Savannah but first want to post about the awesome experience we had last week visiting the Mighty 8th Air Force museum. The post is below.

The Museum, was an awe-inspiring place to visit. It said to plan on a two-hour visit, we were there for six hours. There were 16 sections to the museum, from how the 8th was formed, to the men involved, to barrak life and survival stories of the men who had to bail out and either escaped or were captured. They also have a restored B-17 there called the City of Savannah. She was the 5000 B-17 built at Hunter Field Ga. and was built-in 1944. Saw action with the 8th and returned back in 1946 had a few years as a transport and then scraped to the bone yard. Rediscovered in 2000, and with years of restoration there she is for all to see. Of the 13,000 B-17’s built during the war only 43 still exist, some can still fly and some just restored like this one.

The 8th was formed in 1942 and disbanded in early 1946, they had over 800 airfields all over England. It consisted of bomb groups of B-17’s and B-24 liberators, mostly the 17. They also had Fighter groups, with the P-47 thunderbolt ,and then the P-51 mustang as their fighter escorts to and from the missions. In the early days, the P-47 could not escort them into occupied France, so your chances of making the required 25 missions to go back home were 1 in 3 . Once the P-51mustang came around they could escort the bombers to the target and back ,and became known as “Little Friends”.Each B-17 held 10 men in different positions of the plane. A lot of fire power in those days but the German fighters picked them apart. If your plane was shot up and came out of formation it was swarmed by the enemy planes. If your aircraft was still flyable and level, you could bail out, but if it went in a spin or dive your chances were not good to get out as gravity pinned you where you were. It was not un common to have 30 or 40 planes not come back out of a mission of 100 planes. That’s 10 men to a plane. At one time the 8th could send 3000 planes on a single mission. WOW.

Most missions lasted 10 hours, once over 10,000 feet you had to be on oxygen and the higher you went the colder it got. Mission were usually at 30,000 feet.These guys put up with temps in the -40 degree range ,all the while either being shot at ,or having anti –aircraft fire come at them. I don’t know how they did it. The average age was 22 so I guess you feel like it won’t be you .

As I said the museum was a great tribute to these guys, who after the war never really talked about there experiences. I (we) are so glad that we went. Also Melissa’s father installed and tested all the equipment the radio man would use on a B-17. He was stationed in Arizona at one of the big air bases there, where the planes we fitted up and sent over seas.

A lot of pics below. 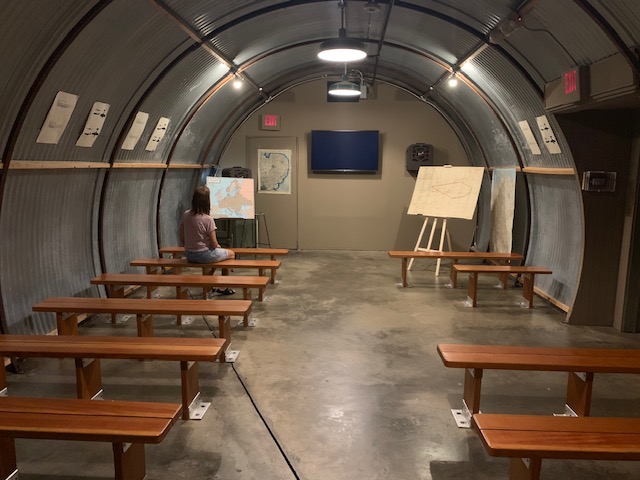 Briefing room ,where pilots met at three in the morning to prepare for their missions. Melissa is the last one to leave,  she says no way.

After 25 mission you joined the Lucky Bastard Club, your ticket home. Very hard to get.

They had a side gunner position set up, with video and working gun to shoot at planes going by. I did not do too bad.

Melissa tried her luck, no luck at all.

I’m in a German prison. Some of my friends think it is a good place for me.

A German flag all shot up.

One side of the 4 engine B-17, notice the front lower twin 50 caliber machine guns and side guns. These were put in late-model B-17 like this one made in 1944. The early ones did not have these, but with so many bombers being attached from the front they had to add them. The front nose is plexi glass, the bombardier st there the entire trip, he was given control of the airplane on the bomb run over a target, nerves of steel. The pilots sat in the top portion a little to the back.

Closer view, there would have been a black metal housing covering the guns, it is off so you can see them.

One of the four big engines. 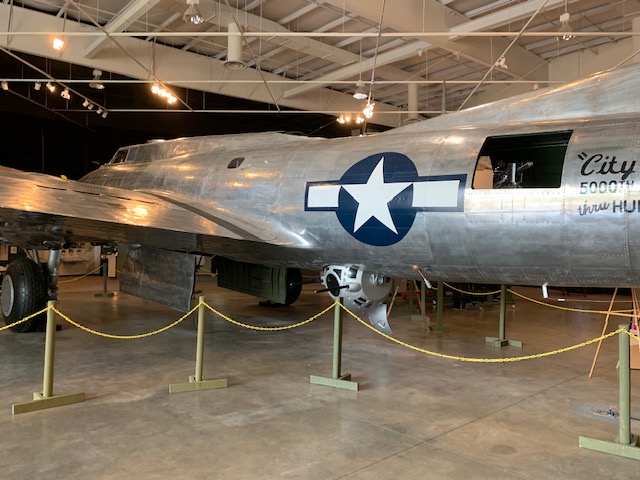 Behind the wings looking forward, notice the side gunners open area, in the early part of the war, they had plexiglass over them but it was hard to see German fighters coming, so it was removed.All notice the ball turret gunners spot under the star. 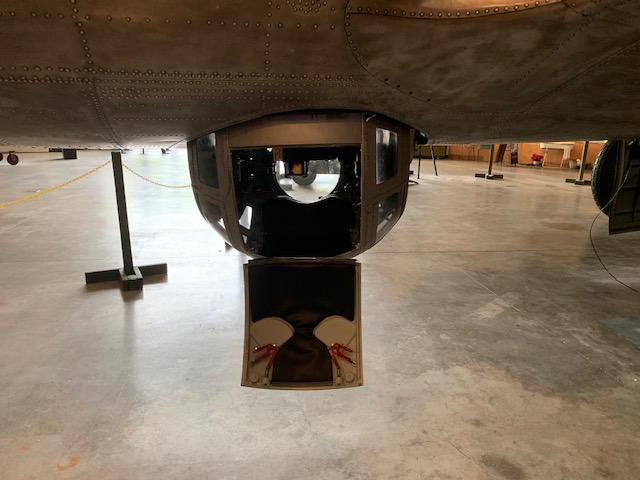 This is where the ball turret gunner st when they were over enemy territory. He would be lowered in from inside the plane in flight,once in no way out, unless you have to bail out, in which case out the hatch he went.

Diagram of his position,, he could swivel in all direction. 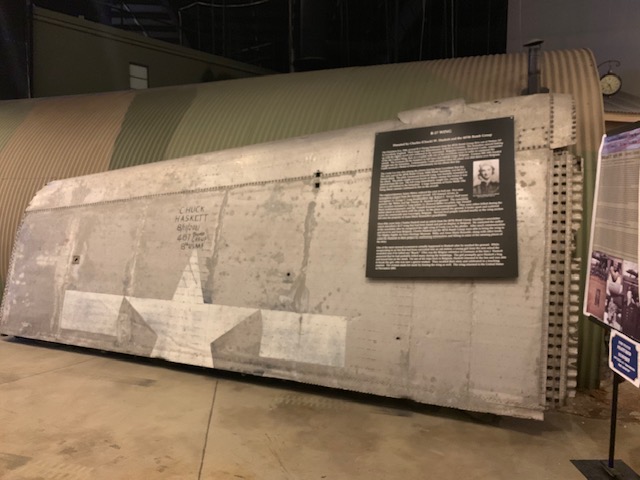 Part of a wing from a downed plane, recovered and put in a museum in Germany after the war. Donated to this museum a few years back.

This is the side front section of the Eager Beaver, cut away after the war and brought home by one of the pilots. Donated to the museum. Nose art was a big thing to identify your plane. 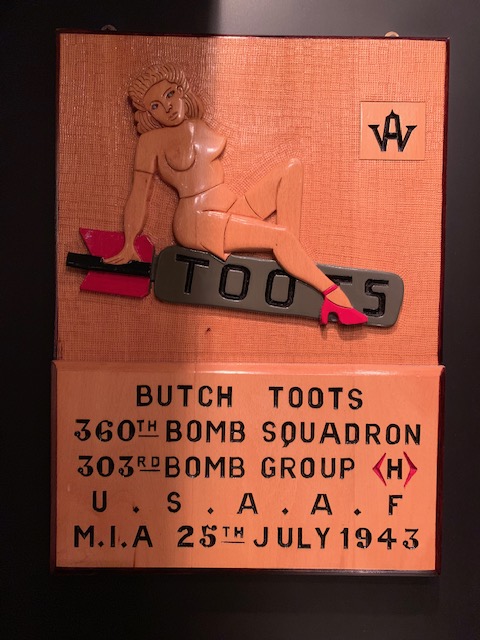 A plaque made up by members of the 8th to honor a lost bomber. 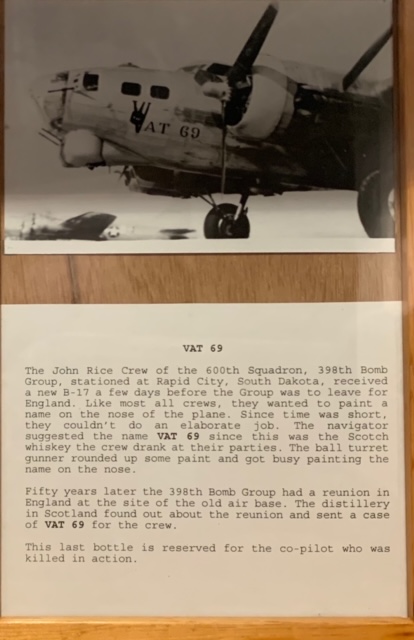 One of the many stories

The pictures below show bomber jacket art done by the men during the war. This jacket below. is supposed to be the finest bomber jacket in existence. 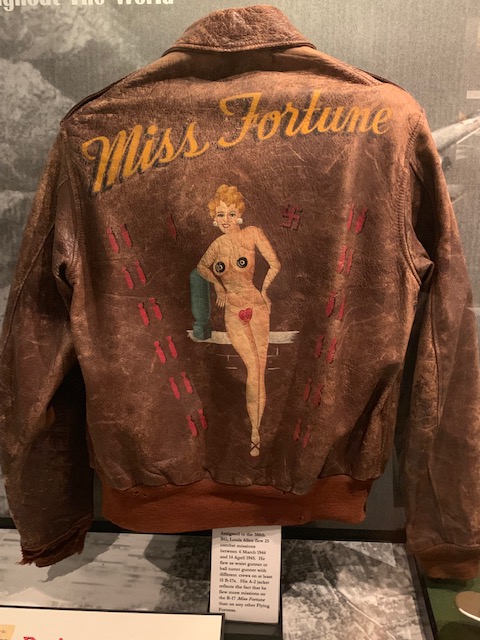 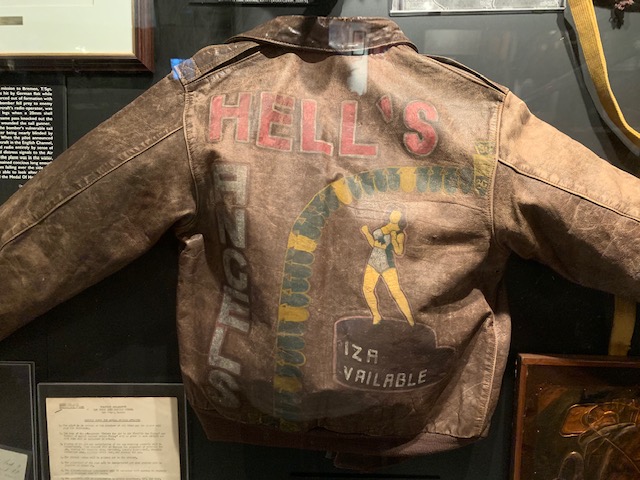 The museum was filled with stories of life and death, during missions and after. The one below is just but one of them. 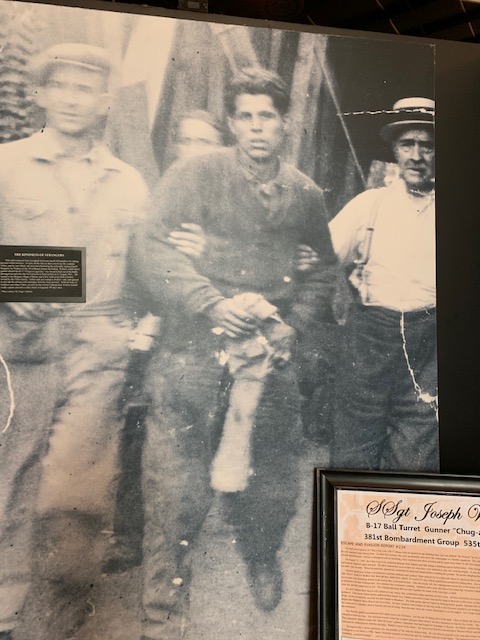 If you had to bail out, you either were killed when you hit the ground, were captured, (many were captured tortured and then just killed) or were lucky enough to have civilians help them escape, which there was a network of thousands who helped, bomber crews escape. If you were caught helping or were suspected of helping most times you were shot on the spot..

This is just one of the many stories we read. 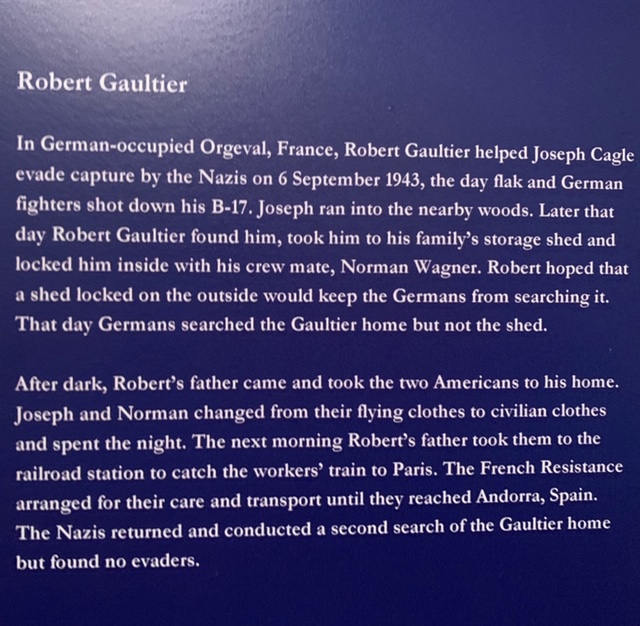