This is my first post, of several on our visiting Savannah and surrounding areas. But first an update today is already April 22 nd, we have two days left here in the Savannah area. The time has just gone right by. We have seen a lot, the weather has been nice and most of all we have had a good time. This post is what we did on one day, we spent a total of four different days in Savannah itself, we spent one day at the Tybee lighthouse  and museum, Fort Pulaski, and the beach. One day at Fort McCallister ,(all of which I will have separate posts on)and one day at the 8th Air Force museum, which I have posted on already. We have been busy, after we leave here we are basically heading back home to our home base in Newfane. So on to what we did one day here.

The Wormsloe Historic Site was once the colonial estate of carpenter Noble Jones, who came to Georgia with James Oglethorpe in 1733. This former plantation is the site of the oldest standing structure in Savannah. The land stayed with Jones, who took several roles in the colony and fought against the Spanish, until he died and continued with his descendants until the state acquired it in 1973.

When entering the Plantation you see a mile-long driveway of oak trees, with plenty of Spanish moss on them that have grown into an amazing tunnel of trees. Someone said the entrance to the plantation is probably just what most Americans think of when talking about a Southern Plantation.  The driveway is spectacular and it’s even featured in several movies. Then we went to the ruins of Noble Jones’ 5-room tabby house. The ruins of the house, which was built in 1745 of tabby construction, a mix of mortar made from oyster shells, sand, lime, and water, the foundation still stands to this day. Nestled within lush forests and sheltered by salt marshes, the home was once surrounded by eight-foot-tall

From there we went to the colonial life area and saw buildings such as a blacksmiths house what was still left standing  There are also paths that lead out to the waters of the Isle of Hope, where there are breaks in the trees and even docks to venture out on to get a great view. We both we’re glad wedidn’t miss this “must see” of Savannah treasures. 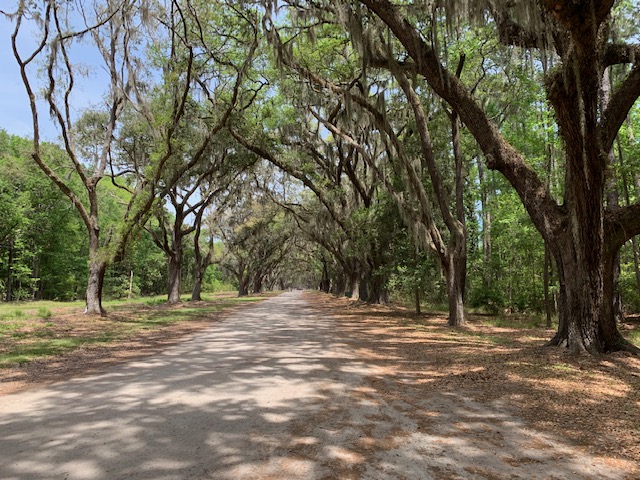 This was an awesome site to drive down, when all the trees we planted, they were little and as each side of the driveway had other trees by them these live oak trees grew inward. They are over 150 years old. 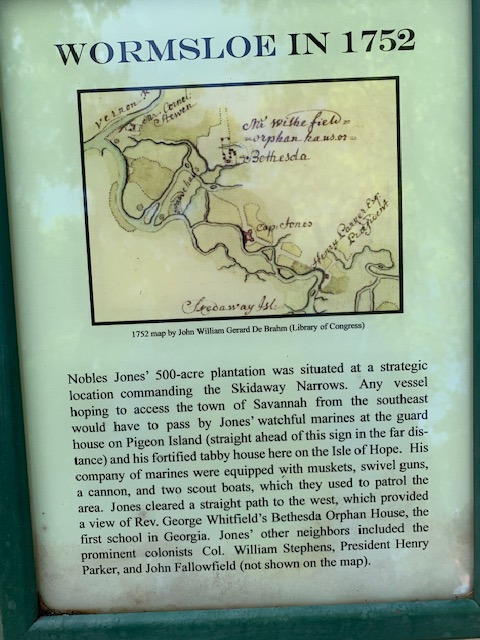 At first this was not a plantation but rather a front line fort, to watch for the Spanish who may invade from Florida.

This is the inside of the typical house a family would have lived in in the day, it is only about 10 x 14 or so, one room, the bed is on the right side. Do not have a photo of the house itself,but they are small.

Who knew, Cricket was played way back in the day ,but it was. 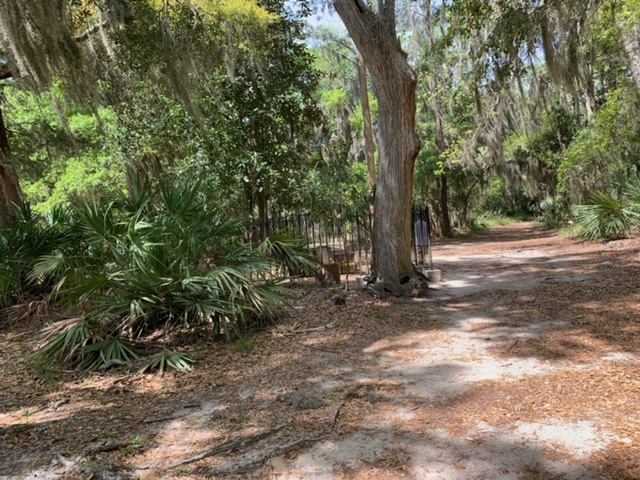 Grave site of Noble Jones, almost right on top of the water, his son removed his body years later and put in in Bonaventure cemetery. What is weird is that his mother and sister are still here.

Close up of grave.

Sweet Melissa, she is standing at the edge of the river that the fort guarded. The tree is a bald sypress and is 250 years old, it fell over in  a storm in the mid 1800’s and has grown itself into the river bed and is still alive.

Old Fort Jackson is named after James Jackson, a one-time governor of Georgia who liberated Savannah from the British in 1782. Facing the Savannah River, the fort was originally built of earth, faced with brick, and topped with a gun platform of wood – making it one of the strongest fortifications in the country.

During the War of 1812, the United States anticipated an attack on Savannah and took several steps to prepare the fort for action. They built a palisade nearby, added a rail to the top of the cannon platform, and created a “hot shot furnace” where cannonballs could be heated to set attacking ships on fire. The war ended in 1815 with Savannah safe and secure.

In January 1861, under orders from then Georgia Gov. Joseph Brown, Confederate troops seized the fort from federal control. Throughout the Civil War, Fort Jackson served as a vital Confederate stronghold, housing several elite regiments and a heavy artillery unit. In December 1864, Union Gen. William Tecumseh Sherman concluded his famous March to the Sea at Savannah, and the Confederates were forced to abandon the site.

Before exiting, the soldiers took measures to render the fort and its munitions useless to Union troops. They set the barracks ablaze, dumped ordinance in the surrounding moat and the river and rigged the fort’s doors to explode.

Because of advances in artillery technology, Fort Jackson fell into obsolescence and was sold by the federal government in 1923. The Georgia Historical Commission opened the fort as a historic site in 1969, but financial problems forced its closure in 1975.

In the late summer of 1976, the Savannah based nonprofit Coastal Heritage Society reopened Old Fort Jackson under a lease from the State of Georgia. The society receives no federal funds and supports its historic operations through charitable gifts and memberships.

Today, Old Fort Jackson remains a historical site that has tours, demonstrations, reenactments and cannon firings among other activities.

One of the many rifle ports 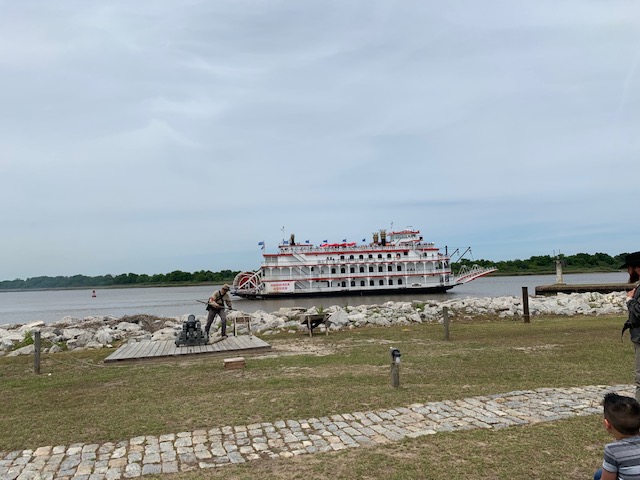 The cannon had just been fired at the river boat, I have a video if I can figure out how to get it on the blog I will. 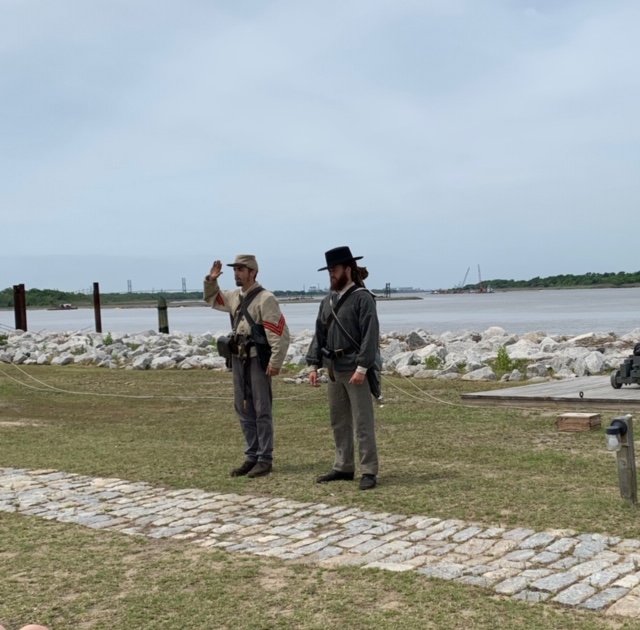 On top the fort walls, this is how they moved and lifted cannon up in the day, block and tackle.

Which way did it go. 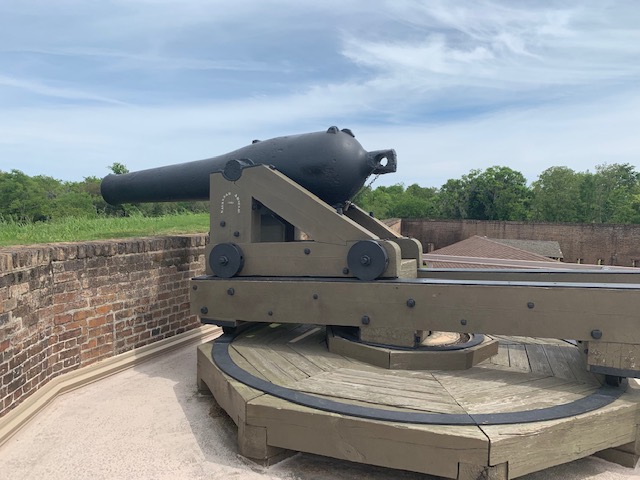 Melissa, tried her hand at being a signal officer, the war is lost. 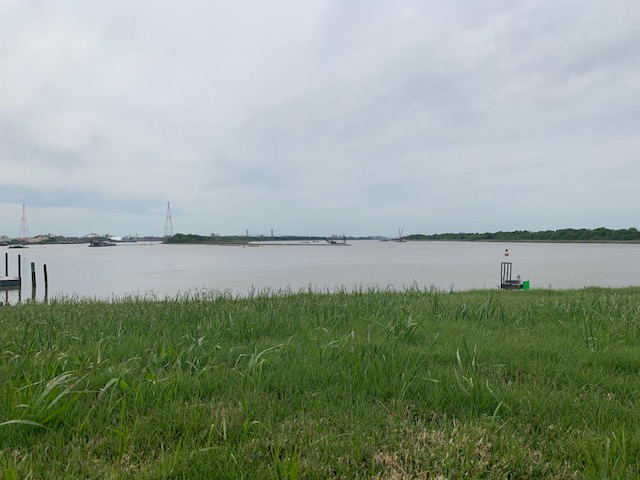 Looking out at the river.

Bonaventure Cemetery was a plantation settled by Colonel Mylryne about 1760, he built a red brick plantation house on the land and named the place Bonaventure, which means “good fortune” in French. The property was seized during the Revolutionary War. Eventually it was bought by Peter Wilberger, owner of the Pulaski house for use as a cemetery. The city of Savannah purchased the cemetery in 1907.

Many of Savannah’s statesmen, citizens and soldiers and entertainers are buried in here.  In recent years it has become one of Savannah’s most popular tourist attractions. The cemetery became famous when it was featured in the 1994 novel Midnight in the Garden of Good and Evil by John Berendt, and in the movie, directed by Clint Eastwood, based on the book.   It is in the National Registry of Historic Places, while still an active cemetery and it is always listed as one of the top beautiful and peaceful cemeteries in the world.

She was born in 1883 and her grave is one of the most visited sites.

The monument was done from a photograph taken shortly before her death in 1889. Gracie was known to everyone in Savannah as her father owned Pulaski House, one of the city’s best hotels. She greeted and charmed all the guests and, when she died of pneumonia, the city mourned, as did many people around the world who had come to know her. 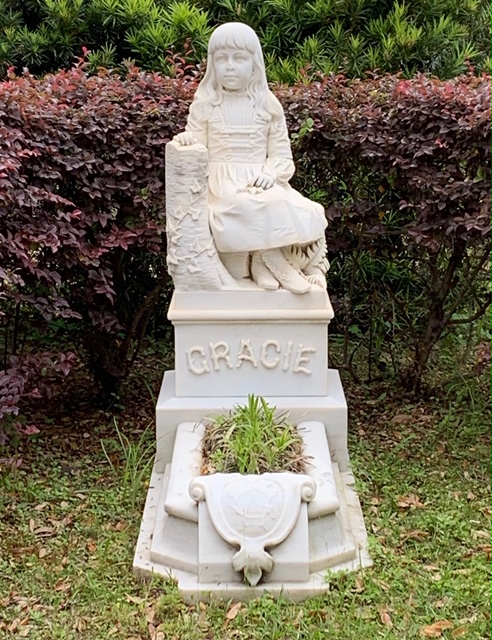 This monument is dedicated to the memory of Julia Denise Backus Smith, a prominent member of Savannah society, who died 2003. As her epitaph indicates, she worked with compassion for the less fortunate of Savannah as a city commissioner. She was also the first woman from her city to compete in the Boston Marathon, and went on to win races in Georgia.Corinne Elliot Lawton

This was one of the sadder stories…the story of Corinne Lawton. Her father was General Alexander Robert Lawton CSA, Civil War an important figure in Savannah. She met and fell in love with a man who was “across the tracks” and beneath her in society and they wanted her to marry someone against her wishes, a wealthy man from Savannah Society. As the story goes one day before the wedding , despondent and heartbroken, she rode her father’s best horse to the banks of the Savannah River and leaped in and drowned.  Our crying angel in all her splendor. 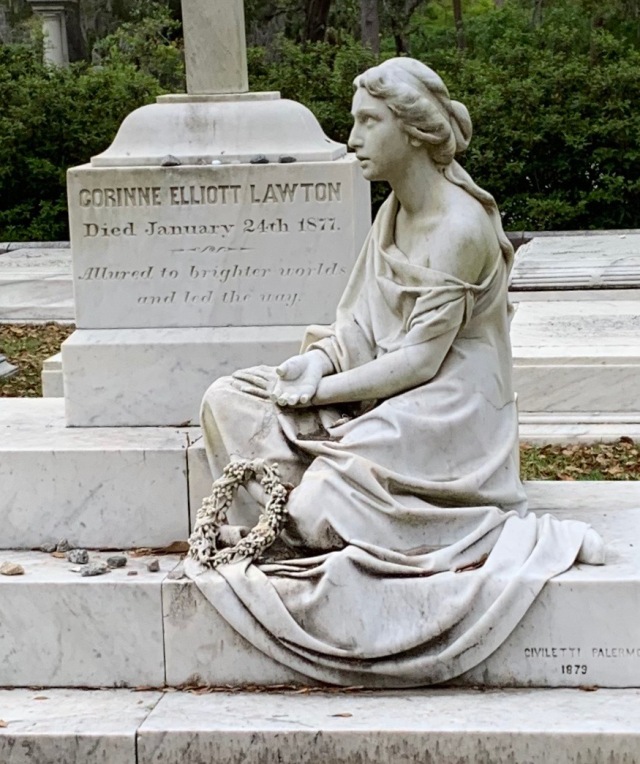 Johnny Mercer, born November 18, 1909, Savannah, Georgia, U.S.—died June 25, 1976, Bel Air, California), American lyricist, vocalist, and composer.   In 1942 Mercer founded Capitol Records with two other people and is credited with more than 1,000 lyrics including compositions for movies and Broadway shows. He received nineteen Academy Award nominations, and won four Best Original Song Oscars. He wrote the lyrics for these songs I know, I bet Jennifer does too! “Jeepers Creepers,” Moon River,” “Zip a dee doo-dah, zip a dee ay,” and many others. 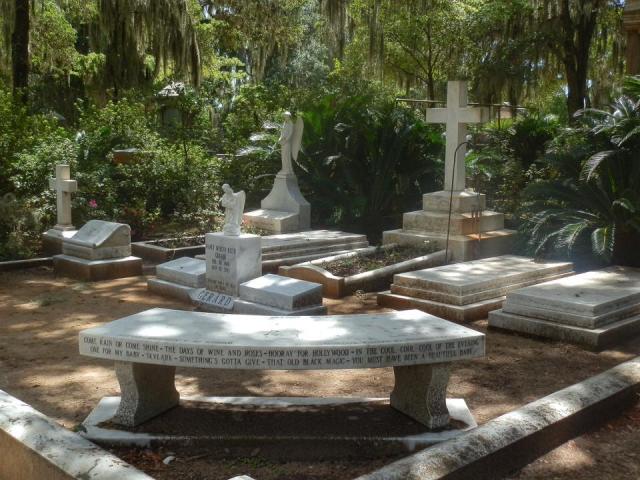 Below are other pics taken at the cemetery. 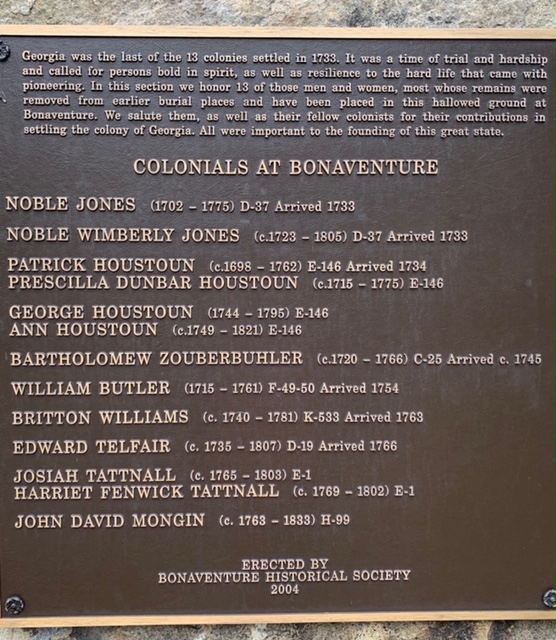 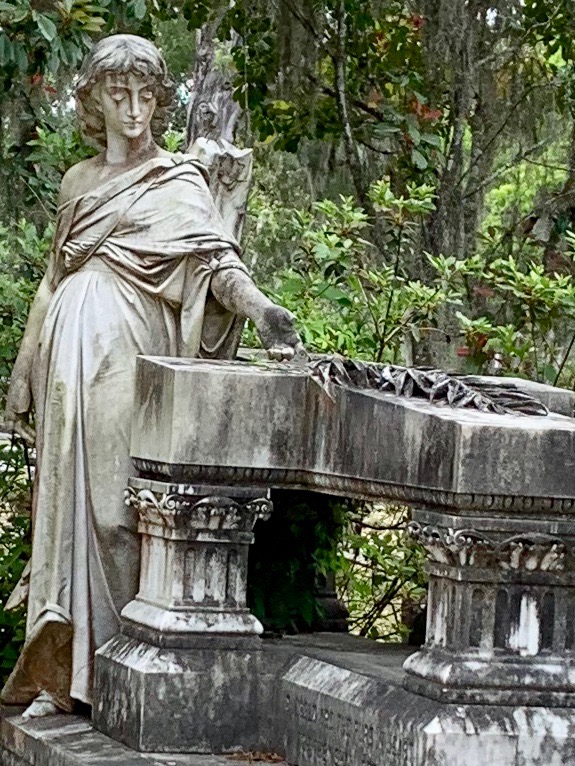 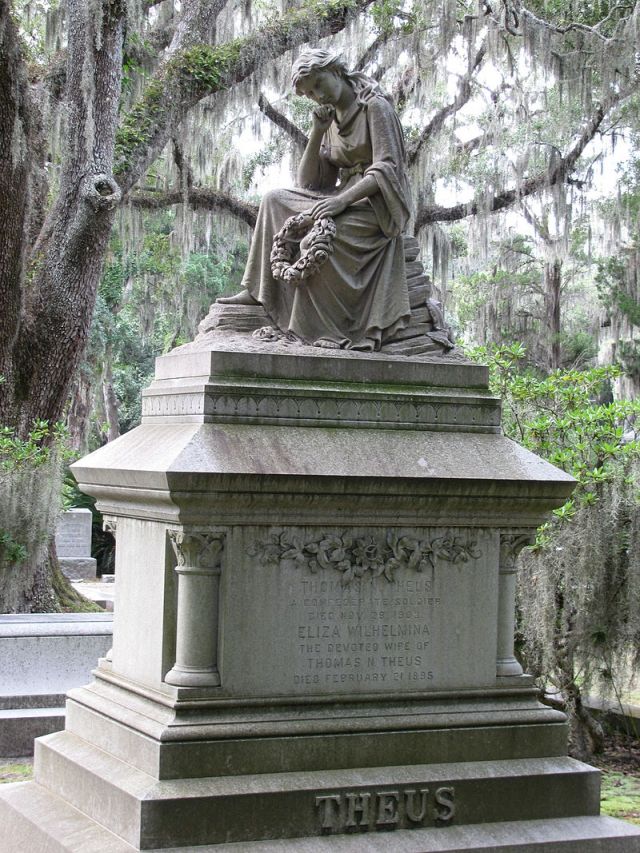 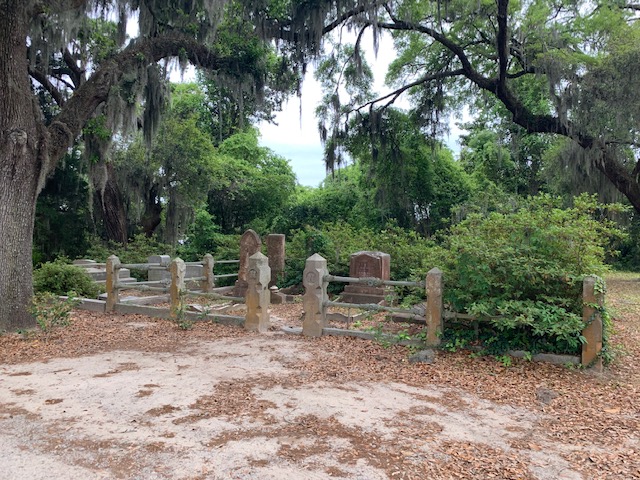 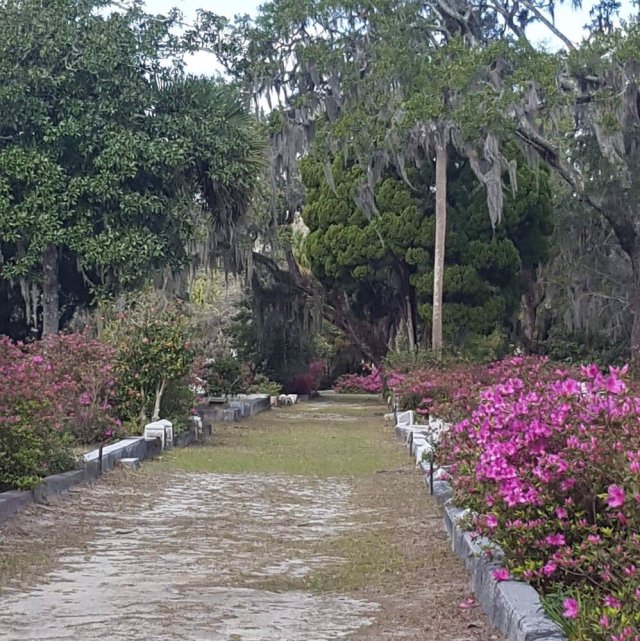 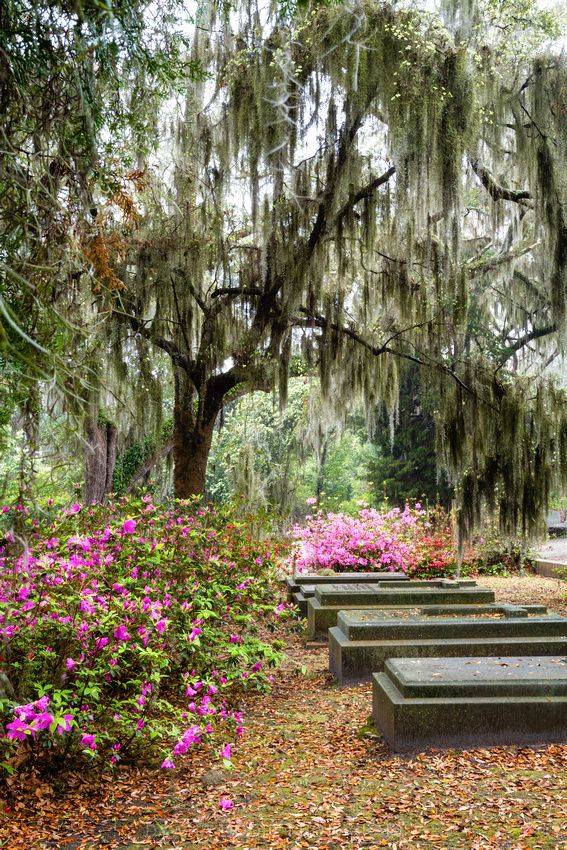 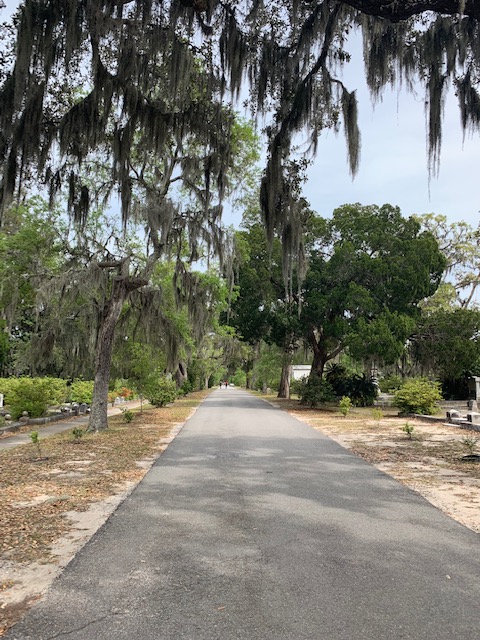 One of the many, many lanes in the cemetery. 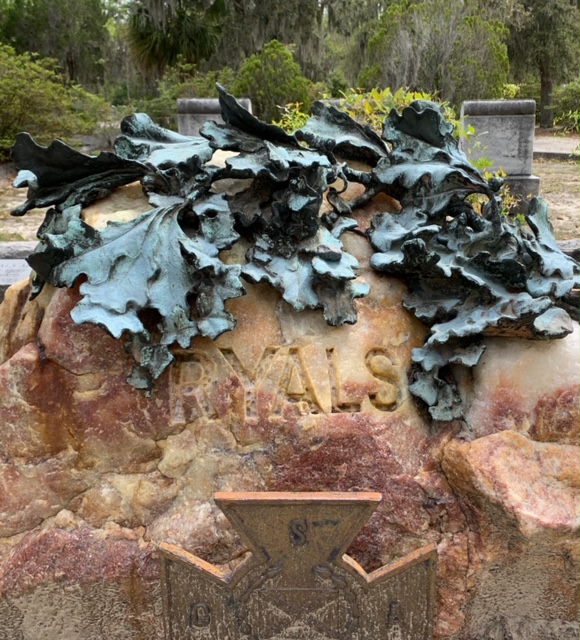 Confederate soldier name just on a rock, no dates at all.

Another confederate soldier, there were a lot like this.

Three brothers all confederate soldiers, lie next to each other